skip to main | skip to sidebar

When I first saw her, she was lurking around the garbage dumpsters behind a dreary apartment complex known as a hangout for meth heads and vagrants. It was not a nice part of town, yet there she was. I hadn’t noticed her before. She had been tarted up with significant effort, but there was a certain Kmart squalor to her wardrobe. Very shabby chic. Ghetto Fabulous. Despite the tattered attire, she possessed a tempting beauty lying just under the surface. There was suggestiveness to her curves that I found irresistible. I wanted her. There was a for-sale sign around her neck, so I called the pimp. 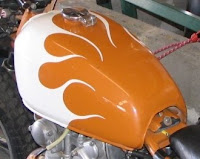 He was nervous and jumpy, but eager to tell me all about her alluring qualities. He was proud of the efforts he had invested to get her into shape and back out on the street. His shifting eyes glanced across my face from time to time as incessant chatter spilled forth from his dry, cracked lips. For suspicious regions that were never fully explained, he had to get out of town. Soon. He was heading for the desolate lands in northern Canada. Maybe Alaska. I sensed that he wished she could accompany him on this journey but maybe he feared for her safety. Or maybe he simply needed to travel light to remain nimble. I noticed him sneaking wistful glances at her, and it was with heavy reluctance that he accepted my offer. His voice trembled with insecurity. He wanted to make sure I would care for her appropriately, to which I assured him that I would treat her well. Something in the autumn air caught in my throat. The smell of decaying leaves swirled the faint suggestion of mortality down the sidewalk. He took my cash, they said goodbye, and she came home with me.

When I got her back to my garage, I stood her in the middle of the floor and slowly walked a sinuous circuit around her, inspecting her from multiple angles. She looked even better, alone, in private, with my white florescent shop lights snaking shiny slivers of silver light across her curves. I walked over to her and stretched out my trembling hand to caress her soft seat. Delicately, I slid my hand across her tank and gently dragged my fingers up her slender fork tubes. I felt a stirring within myself and the urge to ride her swelled up within me, a dark urge, a rising leviathan. I swung my leg across her middle and mounted her. Sliding my hand down between my legs and under her tank, I used my fingers to gently open her petcock. Tenderly, I fondled her choke lever to prime her carbs. Then I kicked her gently. During this first attempt to turn her on, she resisted all my charms. I groped her throttle and twisted, hearing the cable slide in its sleeve. I kicked her repeatedly, yet she continued to resist. Changing tactics, I plied her with starter fluid until I could smell her arousal. Then, I choked her and kicked her violently. She barked and I felt a spark! Ahh… Being a dirty girl with a sordid history on the streets, she likes it rough. I roughly kicked her a few more times and finally, she moaned in response. She convulsed, then I felt her burst into life. Contained fire swelled within her cylinders. I fondled her carbs some more, and soon she was smoothly purring. Clicking her into gear, we rolled out of the garage, the two of us moving in unison through space and time. She rumbled warmly between my legs and I could feel her responding to me as I opened her up. Shimmering wind blew against my face as we glided beneath the frosty night sky and I felt the cool air moving around me, licking at me, sliding airy fingers over my cheeks and up my sleeves. We carved a howling tunnel through the quiet night as we penetrated the void, trailing a murky echo in the air behind us. Watery tears slid from my eyes and streamed backward along my cheeks, each of them leaping into the darkness to join with the laughing stars swirling above us.
Posted by zenrider at 9:04 AM

zenrider
The truth is… I have no idea what is going on here.